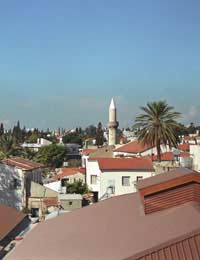 As a former British dependency Cyprus is well disposed toward buyers from the United Kingdom, and its warm climate and low tax regime has made it particularly popular for retirees. Ninety percent of Greek Cypriots speak English and it is one of the few countries in the world where skiing and swimming in the sea are possible on the same day!

For Cyprus it has to be cheap flights, and the island is well served with over 360 flights a week. Although in theory it’s possible to take a train through continental Europe to Greece or Turkey and take a ferry to Limassol or Larnaca, the time and cost is prohibitive. The flight from the United Kingdom is four and a half to five hours, depending on the departure point.

One of the largest Mediterranean islands, Cyprus lies off the southern coast of Turkey, and enjoys a long hot summer, and comfortably cool winters with a moderate amount of rainfall. The island has glorious beaches and a central plain bordered by mountains to the north and to the south.

For visitors from the United Kingdom there is familiarity in the Cypriot pound, although it’s divided into a hundred cents rather than pennies, and cars drive on the left side of the road. The standard of living is high, easily on a par with the rest of Europe, but at a cost some two-thirds lower. Recent studies have shown that a couple with a house and a car could live comfortably on CY£350 to 450 per month. The Cypriot pound at the time of the study was running at €1.70 or £1.15, but there are plans to move to the Euro in 2008, and it is already possible to obtain Euro-based mortgages, which attract an interest rate that's half a point lower.

Formerly a British territory, Cyprus gained independence from the United Kingdom in 1960, and Greece and Turkey have quarrelled over its ownership ever since. This reached a head in 1973 when Turkey sent an armed force in and occupied about a third of the island, it is now governed as an independent state by a government that is not recognised internationally, except by Turkey.

The Greek Cypriot’s government of the southern part of Cyprus is internationally recognised, which makes it the safer, and therefore more expensive, area to buy property. Both sides publicly call for the division to be eradicated and one government for the whole island and the situation has mellowed significantly in the last five years or so.But this does mean that it is absolutely essential to obtain proper independent legal advice on title deeds, particularly for older properties, to assess the risk of a property or land being claimed later by a refugee from the other section of the island, or their dependents.

In the Greek part of the island, property is developing fast as foreign buyers provide the funds to support the building. Much of this is focussed around the towns close to the two airports, Larnaca and Paphos, and golf resorts are now springing up between these two centres.

The party animals centre around Agia Napa in the east, and quieter more rural areas around Polis, in the east, attract more environmentally minded buyers looking for farms to restore and run.

It is possible to buy property in the Turkish part of the island and many British buyers have done so, but although prices are significantly cheaper, the risks are greater.

Property purchasing is relatively straightforward for buyers from the UK as it is based on the same principles, although overseas buyers initially need to apply for permission from the Council of Ministers. Sometimes, particularly for new build developments, you may be asked to put down a small deposit of around 1% once a sale is agreed. This will secure the property and the vendor will take it off the market.

Once contracts are drawn up, a deposit of 10% is paid, or 20-30% for new build. At the point of purchase, contracts are exchanged and the buyer pays for the property, the stamp duty, transfer fees, land registration fees, legal fees and (on new build only) VAT, so it’s important to make sure that they are all covered. Together these will normally add up to around 6-7% (apart from the VAT) of the price of the property, and there may be agency fees, surveyors fees or mortgage fees, depending on the kind of property and how you found out about it.

When you take possession, you may also have to pay for the connection of the various utilities, although a new-build development with a reputable company will arrange this for you. The final stage is the transfer of the property deeds. Local taxes amount to between CY£50-150 per year.

Cyprus is warm and quiet, has a very low crime rate and with its lovely sea and mountain areas it is sure to have something to please every house hunter.