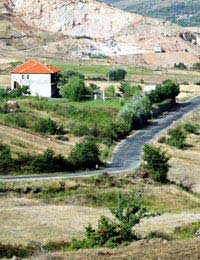 The lure of Albania is down to it sharing the same coastline as Croatia Montenegro and northwestern Greece, but with coastal properties prices up to a quarter of some of those countries. However, the country is still in a state of transition following upheaval in the post-Communist era and it would be wise to visit a few times to make sure it’s the right location for your home in the sun.

Coming Out Of the Cold

Albania was kept in almost complete isolation by its dictator, Enver Hoxha, from the end of the Second World War until his death in 1985, and since then Albania has, with some difficulty and slowly but apparently inexorably changed its political and economic regime to ally with western Europe, aiming to join NATO in 2008 and the EU in 2014.

A key element of those changes is the development of an international tourism industry similar to that of its near neighbours, and the building of the new airport at the country’s capital, Tirana, was a key part of that drive. Infrastructure improvements such as road and rail networks and a new thermal power station are all helping to develop a healthy economy.

Another major part of the re-joining the rest of the world has been to reform the land and registry process, which was completely different in the Communist era. Ownership documentation has had to be created for land and buildings and in many cases restoring ownership to people whose property was confiscated in 1945, or compensating them where reinstatement was not possible. This is the only real risk, but as long as foreign buyers use an Albanian lawyer who is bilingual, it will be possible to identify whether or not the property paperwork is all in order.

The selling procedure is fairly simple with the public notary at the heart of the process. Once the seller produces their ownership title certificate, the notary checks the documentation against the actual property being sold and then obtains a second certificate which confirms that the seller is the legal owner of the land or property and has the right to sell.

The notary then registers the sales contract and the sale is then completed with the notary registering the sale once the money has been handed over. Registration of the complete sale is then performed by the notary, once you have paid the tax, this is on a sliding scale and is somewhat confusingly referred to as ‘income tax’. There is no stamp duty and no capital gains tax payable in Albania, so the costs of buying the property should be between 3-7% depending on the income tax.

As is common with many other emerging markets in Europe, there is a definite split in the market, between city apartments for long-term buy-to-let and coastal resort-based property. City property has gone up 30% per annum for the last few years, firstly because of the relaxing of restrictions on Albanian nationals with regard to the rental and purchase of property, and secondly as Albanians who have made money abroad bring that money back home. Estate agents and developers who were active in Belgrade and Sofia in the run-up to their entry into the EU believe the conditions are right for the same levels of growth that were seen there. Some optimists are looking at trebling your money within three years, but remember, the price of property can go down as well as up!

Foreigners will find it hard to locate coastal resort properties, as there are far fewer estate agents actively targeting foreigners than in neighbouring countries. There are few high-rise developments, as there is a three-storey limit in place on most of the coastline and it is not possible to build within 150m of any waterline. Two-bad apartments in a new five–storey block near the beach at Durres, on the coast less than a half-hour drive from Tirana, are on sale from €38,000, and the second floor of a villa near the tourist attraction of the protected roman ruins will cost €60,000.

Off-plan opportunities for very high quality four bed villas on the northern bay of Durres are available from Albania Estates from €210,00 upward. In the south, on the coast of the Ionian Sea, the resort of Vlora has apartments from €25,000 with 70% mortgage financing available from the developers.

For the adventurous, land is available on the coast but hard to find, as the Albanians are aware that values are likely to rise and are holding onto their land waiting for it to do so. But the plots that are available are perfect for developing, or for holding and selling off in smaller units.

It’s early days for Albania, the country that’s sometimes referred to as the “Switzerland of the Balkans”, as the inland mountain ranges and lakes are very similar in their beauty. But it’s probably better than Switzerland as there is that glittering coastline too. Take a close look at Albania; it could have the investment for you.