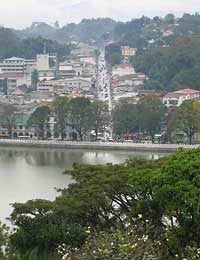 Sri Lanka, the tear-drop shaped tropical island off the southern coast of India formerly known as Ceylon, was a British colony until gaining independence in 1948 and still retains good relations with the United Kingdom.

Being an island, there are over thirteen hundred kilometres of beach, washed on one side by the warm waters of the Indian ocean and fringed on the other by palm trees; the classic tropical idyll.

Inland the country is largely flat, with a mountainous region to the south where the kingdom of Kandy held out against the British until 1815. Here and to the north of the central region are ancient settlements from the Middle Ages, the 5th-century and from five thousand years before the birth of Christ.

The property action is mostly on the coast though, mostly in the three main tourist resorts to the south of Colombo, the capital, where the international airport is. About 35 miles brings you to Bentota and Beruwela, while Hikkaduwa is closer to 70 miles from the airport. Post-tsunami building restrictions were lifted late in 2005 with the limits on building within 100 to 200m of the coastline (it varied from district to district depending on the nature and orientation of each stretch) reduced to between 25 to 55 metres to allow construction to inject more life into the tourist economy.

This has allowed building to start again with the usual resort fare of villas and apartment buildings. A modern 5-bedroom villa close to Hikkaduwa is on the market for ten million Sri Lankan rupees, around £45,000.

For something different, in Galle on the southern coast there is a seventeenth century walled fort (a Unesco World Heritage Site) that protrudes into the sea. It dates from the time of the Dutch occupation, before the British took control at the turn of the eighteenth century, and many of the old colonial properties have been bought and restored by foreign owners. Many of these people are ex-pats based in Honk Kong, which is a relatively short flight away, who heard from holidaymakers how beautiful and relaxed the island is and how cheap these historic houses were.

The times of values doubling three times within five years are gone, but local experts still feel there is room for capital growth in the market. For the adventurous, renovation projects in the cooler inland highlands can still be bought in the areas around Kandy. A little colonial cottage on a large plot with panoramic views is available for around £150,000.

The property purchasing climate for foreigners isn’t helped by the imposition of a 100% tax on any property bought in their name. One solution to this that has sprung up is, of course, to buy the property in someone else's name, with the safest route is to form a company with a native that then buys the property. Another alternative, probably easier for someone buying just one property, is to buy a 99-year lease instead.

In recent years the island hasn't been without it's problems. Nearly three decades of civil war were finally ended in 2002 when a treaty was signed between the government and rebel forces demanding an independent Tamil state in the north and east of the country. Then, after two years of rebuilding, the Tsunami devastated large swathes of the southern and eastern coastline. Although foreign aid and an increase in tourism buoyed the economy for a while, hostilities have resumed, although on a much smaller scale, so potential investors would be wise to research the situation before committing their money.
Next Page