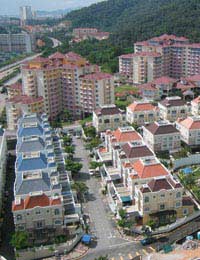 Malaysia, as a former British colony, has strong links to the United Kingdom but for some reason lags behind its neighbours Indonesia and Thailand as a holiday destination, despite sharing many of the same natural features, agreeable year-round climate and hospitable people.

Malaysia has been tipped for a few years now as a dark horse in the holiday home market, with fantastic locations, a stable political and economic climate and relatively low property values. The legal system is based on that of the UK, although house-buying procedures are somewhat different, cars are driven on the left-hand side of the road and it's not unusual to find people who can speak English as it is taught in schools.

Malaysia is split into three geographic regions, the mainland occupying much of a peninsular that drops down from Thailand and has the island state of Singapore at it's southern tip. The other two regions are on the northern coast of the island previously known as Borneo. Sabah is at the western end and Sarawak at the north-eastern tip, separated by Brunei, with the majority of the island to the south belonging to Indonesia.

Although maps will show that Sarawak and Sabah are joined together to the south of Brunei, the reality is that the territory inland is densely forested mountain ranges and virtually impassable, with only rivers providing access. This means that transportation links between the two states and to the mainland, is limited to sea and air. This further isolation of Sabah and Sarawak, with no direct flights from the UK, means that the vast majority of foreign property ownership is on the mainland part of Malaysia.

As with many other markets in developing countries, the property offered to foreigners market is sharply polarised between city buy-to-let apartments and holiday properties. Superb beaches and islands, with the eastern coast less well developed than the west, surround the mainland of Malaysia. On the west coast, historic ports from colonial times such as Malacca and Pinang have a mix of historic buildings and tourist facilities, while islands such as and Pulau Pangkor, halfway up the west coast, and Pulau Langkawi, further north by the Thai border, are pure resort locations that have been built up over the last three decades. Malaysia is also proud to have been picked for the third 'Palm' resort in the world, modelled on the original off the coast of Dubai, with the whole of Phase One being sold out shortly after going on sale early in 2007.

The city apartment action is nearly all in the capital and administrative centre of Kuala Lumpur, or its very close neighbour Petaling Jaya (almost always referred to as PJ) where many of the high-tech and manufacturing businesses are located as development spilled out of KL at the tail end of the last century. High-rise apartment blocks are common and the outlook in terms of capital investment is riskier than European locations but with potential for excellent returns.

The Malaysian government has been working to improve buying conditions for foreigners in recent years, recently abolishing capital gains tax, for example. Non-citizens can buy any property as long as it costs more than MYR 250,000 (currently around £40,000) and as long as it is not on Malay Reserve Land, areas that are kept for Malays, the indigenous people of the peninsular.

Although foreigners are currently restricted to only two properties, there are rumours that this restriction will soon be lifted too. Tax on rental earnings is levied at28% although maintenance expenses can be deducted, and local taxes are currently set at a flat rate of 6%.

The buying process is clean and efficient although you are strongly advised to get the services of a lawyer to advise you. Estate agents are widely used but the buyer, as opposed to the seller, pays their fees. A written offer leads to an option to purchase contract which is signed by both the purchaser and vendor (or their representatives) and a ten per cent deposit is laid down. The standard time to complete is three months but it can occasionally take longer than that.

Stamp Duty is paid on a sliding scale based on the property value with the current maximum standing at 3%, and legal fees will start at around 1% but can be a lot higher, so it's a good idea to get an estimate first. It's worth noting that Malay banks are keen to lend to non-citizens and loans up to 90 per cent of value are relatively easy to come by, with rates a little higher than in the UK at around 7%.

Try Malaysia For Yourself

The attractions of Malaysia are there for all to see and it would be a good idea to take an exploratory holiday to see while deciding whether or not to invest. There are encouraging signs from the economic growth forecasts and there is an increase in property values and sales activity. There are even new-build holiday properties offering guaranteed rental periods for the first three or five years, so Malaysia is certainly worth checking out.
Next Page