Buying and Selling Property in Florida 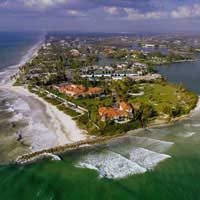 Driven by images from films and television shows delivered by Hollywood for the last fifty years the American dream is well known in the United Kingdom. And for the past ten years or so, more and more of us have decided to own a slice of that dream by entering into the property boom in the US, mostly buying properties in the sunshine state of Florida.

As is often the case, it was the advent of cheap flights that opened up the state for British people, first as a holiday destination and then, inevitably with our appetite for buying property, as a place to put money in bricks and mortar. The strength of sterling against the dollar has also helped and, with the dollar hovering at around two to the pound, equity built up in the UK can buy a lot of house in Florida. There’s no restriction on UK citizens buying property in the US either.

Florida is a large peninsula which forms the north-eastern boundary of the Gulf of Mexico, separating it from the Atlantic. At the southern end the land breaks up into many small islands with a tropical feel, known as the Florida Keys. Being largely surrounded by the sea, Florida is mostly humid, and spring and summer can be wet by the coasts although it is still very hot. Winter and autumn tend to be dryer and cooler but rarely as cold as the UK, and if you go further south into the Keys, the winters are a lot warmer. Hurricane season is from June to November but they occasionally occur outside those months.

Florida is experiencing a boom in population as more people seek this ideal climate and low taxation regime, and tourism is a major economic activity for the state. The latest new theme park to be announced in the Orlando region is Harry Potter World, to be built on an extension of the Universal park and opening in 2009.

UK holidaymakers, particularly families, have mostly been going to the Orlando area, in the centre of the state, for the theme parks and other attractions in the area. As well as the massive Disneyworld with its four distinct parks, there is Universal Studios, Busch Gardens, SeaWorld and many others. But there are also many natural wonders, with the Everglades and Blue Springs State Park, where sea-cows or manatees, can be seen, among the 157 state parks.

For a holiday home and good letting potential, a detached villa with a pool in the Orlando area will provide the best return, with golfing resorts popular as they can achieve rental income all year round. Although the relatively high property prices reflect the area’s popularity, continuing construction creates competition and keeps prices under control. It’s also dryer during the summer as it’s not so close to the coasts.

The Atlantic Coast has some pricey spots, such as Palm Beach and parts of Miami, but also some reasonably priced areas. But be careful when buying outside the tourist areas as there can be local and regional limits on the number of days a property can be let during the year, with some areas banning it completely. Apartments in Miami are good for long-term lets and prices have risen healthily in the recent past, but analysts warn this may not last.

On the other side of the state, summer on the Gulf Coast can be quite wet so it’s less lucrative for renting out, but there are some stunning yachting resorts, for examples Naples, where about 60 per cent of the most monied individuals in the country spend the cooler months. Property is cheaper the further north, and the further inland, you go.

How to Buy in Florida

Many people warn that the buying process has some pitfalls and that professional advice is worthwhile. One of the best things is that all the properties for sale are on a central database so you only have to visit one agent to get access to all of them. As soon as an offer has been accepted, there is a small deposit paid to seal the deal while the formal contracts are drawn up. This purchase contract is a binding agreement but there are clauses that allow you to withdraw under certain circumstances.

The 10% deposit that is paid when the purchase contract is signed is put into an independently controlled account (an escrow account) where it is held while checks are made against government records and insurance is arranged against any third-party claims. Completion then takes place, usually a little faster than in the UK, but be warned; if the dates entered on the purchase contract are not adhered to, there is a serious risk of losing the sale and your deposit money with it.

As a general rule, you should allow at least five per cent on top of the purchase price for the incidental expenses which include legal and notary fees, property transfer taxes and the costs of raising insurances against the title. This does not include building and contents insurances though.

Local taxation can be complex with owners having to pay up to four different local or regional authorities, but on the whole they should come to an annual figure of around 1.5% of the value of the property. Taxation is levied on rental income on a sliding scale that varies from 15 to 34%.

Soak up the Sun

It’s worth taking a serious look around Florida while the exchange rate is so good, whether you are looking for a holiday home or an investment property. The climate is good, prices are low, and many Britons have successfully gained their dream home in the sun there.