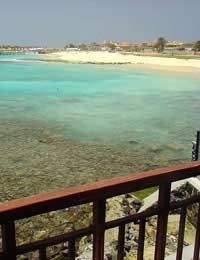 A couple of years ago virtually no-one in the United Kingdom had heard of Cape Verde, a country comprising a small string of islands, ten major and five other islets. But the former Portuguese colony, lying between 500 and 700 kilometres west of Senegal in the Atlantic, is being hailed as the new Caribbean, with an excellent year-round climate and a government that is welcoming foreign investment.

A couple of hours flying time further south from the UK than the Canary Islands and further out into the Atlantic, Cape Verde was uninhabited at the time that the Portuguese colonised it in the fifteenth century, turning it into an important mid-Atlantic stop to take on water and supplies. In 1975 Cape Verde was awarded independence but still has very strong economic and political links to Portugal, and there is significant political manoeuvring to petition the EU for membership talks.

The islands have a tropical climate but it's not as dry as the mainland, because of the surrounding water, and has the benefit of cooling breezes. The dry season runs from November to July with temperatures between twenty-two to twenty-seven degrees Celsius. The rain comes in the early autumn but even then usually only falls on the four largest islands.

The emergence of Cape Verde on the international tourism and property market started at the beginning of the 21st century and direct flights from the UK and Eire, which started a few years ago, sped up the process. Property development is happening very quickly but there are strong guidelines in place to prevent high-rise atrocities and many of the resorts are touting the building restrictions surrounding the nature reserves as selling points to increasingly ecology-aware Brits.

UK visitors will require a visa to visit Cape Verde but it is valid for 180 days and allows a maximum of ninety days on the islands, which makes it the perfect winter sun spot for retirees. Water sports and the unique flora and fauna, recorded by Charles Darwin in The Voyage of the Beagle further widen the appeal of cape Verde, which is good news for those who intend to rent their properties out to holidaymakers.

Much of the building is on the larger islands, Sal and Santiago in particular, with Maio and Boa Vista being tipped as up-and-coming property hotspots, as development is in earlier stages and quick profits from flipping may still be possible. As with many other emerging holiday property markets, it is not as easy as developers say it is to realise the profits from selling on, as salespeople are given better incentives to promote new-build ahead of resale properties, so do your own research and be aware of the risks.

Price rises of nearly 20% were quoted over 2006 but other sources say that the market is too small and too immature for reliable trends to have emerged. There are large discrepancies in prices where a developer may simply decide to try a property on one island at twice it’s price on another one, just to see if someone goes for it.

Two bedroom, two bathroom apartments in eastern Santa Maria, the main resort town on the island of Sal, are on sale for £38,000, while around the corner one bedroom apartments are twice that price. At the other end of the scale, a four bedroom, four bathroom villa with pool, marina berth and gold club membership will set you back one-and-a-half millions pounds.

The property buying process is based on that of Portugal so is quite straightforward although it can take some time. Foreign purchasers will need a Personal Fiscal Number which can be obtained from the local tax office. The first contract is a promissory contract and the second the final one, known as the Escritura. A deposit, usually between ten to thirty per cent is paid at the promissory stage and the remainder with the final contract.

In between these two stages your legal representative should make checks with the land registry to ensure that the seller legally owns the property and that they have the right to sell. Property is usually freehold and there is a three per cent tax at purchase, but no taxes levied at the selling point. There are also no taxes for the first five years; a concession the government has made in order to attract foreign buyers.

There is certainly a buzz surrounding Cape Verde in the international property market at the moment and an investment may well be worthwhile. The risks are that over-supply while the tourism market is being built up may dilute returns and that the infrastructure projects may lag behind the accommodation building, but long-term investment prospects looks better than short-term at the moment.
Next Page